These stories are part of the La Fontaine unit. Story source: Fables in Rhyme for Little Folks by W. T. Larned and illustrated by John Rae (1918).


The Hare and the Tortoise

LIBRIVOX AUDIO: The Hare And The Tortoise

Said the Tortoise one day to the Hare:
"I'll run you a race if you dare.
I'll bet you cannot
Arrive at that spot
As quickly as I can get there."

Quoth the Hare: "You are surely insane.
Pray, what has affected your brain?
You seem pretty sick.
Call a doctor in — quick,
And let him prescribe for your pain."

"Never mind," said the Tortoise. "Let's run!
Will you bet me?" "Why, certainly." "Done!"
While the slow Tortoise creeps
Mr. Hare makes four leaps,
And then loafs around in the sun.

It seemed such a one-sided race,
To win was almost a disgrace.
So he frolicked about
Then at last he set out--
Too late! Though he sped like a dart,

The Tortoise was first. She was smart:
"You can surely run fast,"
She remarked. "Yet you're last.
It is better to get a good start." 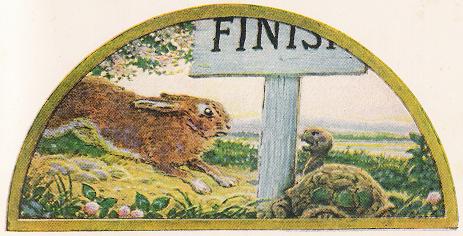 The Ass In The Lion's Skin

LIBRIVOX AUDIO: The Ass In The Lion's Skin

An Ass in The Lion's skin arrayed
Made everybody fear.
And this was queer,
Because he was himself afraid.

Yet everywhere he strayed
The people ran like deer.
Ah, ah! He is betrayed:
No lion has that long and hairy ear.

Old Martin spied the tip, and country folk,
Who are not in the secret of the joke,
With open mouths and eyes
Stare at old Martin's prize —
A Lion led to mill, with neck in yoke.

The Frog and the Ox

LIBRIVOX AUDIO: The Frog Who Wished To Be As Big As The Ox

There was a little Frog
Whose home was in a bog,
And he worried 'cause he wasn't big enough.

He sees an ox and cries:
"That's just about my size,
If I stretch myself--Say Sister, see me puff!"
See me puff!

But she shook her head. And then he lost his wits.
For he stretched and puffed again
Till he cracked beneath the strain,
And burst, and flew about in little bits.