As you've seen, Brer Rabbit is a powerful trickster, but so is Brer Turtle, and that is true in Africa also. In some regions of Africa, the rabbit is the arch-trickster, while in other regions, it is the turtle, whom you can read about in the Nigerian unit. For example, here's a story where the Nigerian turtle tricks the stronger animals in a tug-of-war, much like Brer Turtle in the story you are about to read: How the Tortoise overcame the Elephant and the Hippopotamus.

One night Miss Meadows and the gals they begun a candy-pulling, and so many of the neighbors come in response to the invite that they had to put the molasses in the wash pot and boil the fire in the yard. 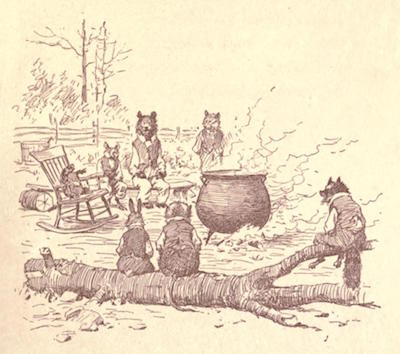 Brer Bear, he help Miss Meadows bring the wood, Brer Fox, he mind the fire, Brer Wolf, he kept the dogs off, Brer Rabbit, he grease the bottom of the plates for to keep the candy from sticking, and Brer Terrapin, he climb up in a chair, and say he'd watch and see that the molasses didn't boil over. 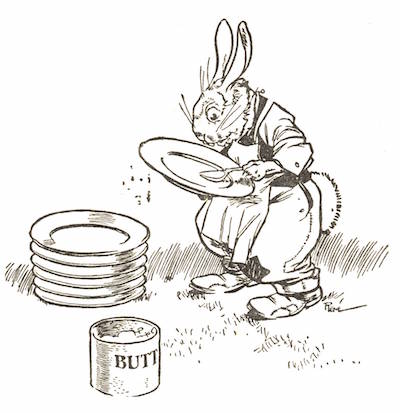 They was all there, and they weren't cutting up no didos, neither, 'cause Miss Meadows, she done put her foot down, she did, and say that when they come to her place they had to hang up a flag of truce at the front gate and abide by it.

Well, then, whiles they was all a-sitting there and the molasses was a-boiling and a-bubbling, they got to running on talking mighty biggity. Brer Rabbit, he say he the swiftest; but Brer Terrapin, he rock along in the chair and watch the molasses.

Brer Fox, he say he the sharpest, but Brer Terrapin he rock along.

Brer Wolf, he say he the most servigorous, but Brer Terrapin, he rock and he rock along.

Brer Bear, he say he the most strongest, but Brer Terrapin he rock, and he keep on rocking.

Then they all laugh and holler, 'cause it look like Brer Bear more stronger than a steer. By and by, Miss Meadows, she up and ask, she did, how he gonna do it.

"Give me a good strong rope," says Brer Terrapin, says he, "and let me get in a puddle of water, and then let Brer Bear see if he can pull me out," says he.

Then they all laugh again, and Brer Bear, he ups and says, says he, "We ain't got no rope," says he.

"No," says Brer Terrapin, says he, "and neither is you got the strength," says he, and then Brer Terrapin, he rock and rock along, and watch the molasses a-boiling and a-bubbling.

After while Miss Meadows, she up and say, she did, that she'd take and loan the young men her bed-cord, and whiles the candy was a-cooling in the plates, they could all go to the branch and see Brer Terrapin carry out his project.

Brer Terrapin weren't much bigger than the palm of my hand, and it look mighty funny for to hear him bragging about how he can out-pull Brer Bear. But they got the bed-cord after while, and then they all put out to the branch. When Brer Terrapin find the place he want to, he took one end of the bed-cord, and begun the other end to Brer Bear. 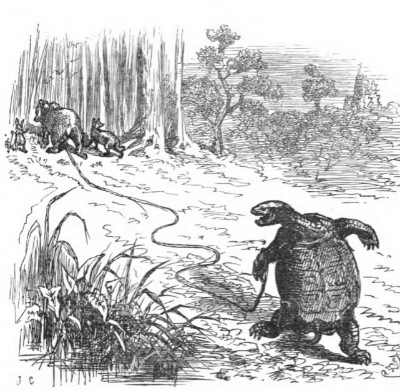 Then they all put out and left Brer Terrapin at the branch, and when they got good and gone, he dove down into the water, he did, and tie the bed-cord hard and fast to one of these here big clay-roots, and then he riz up and give a whoop. 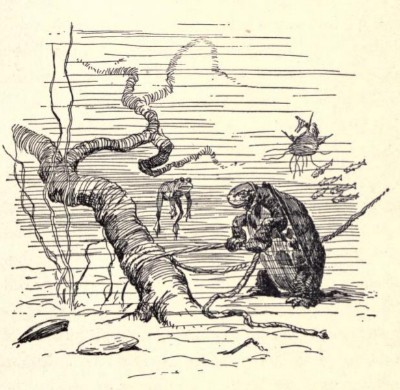 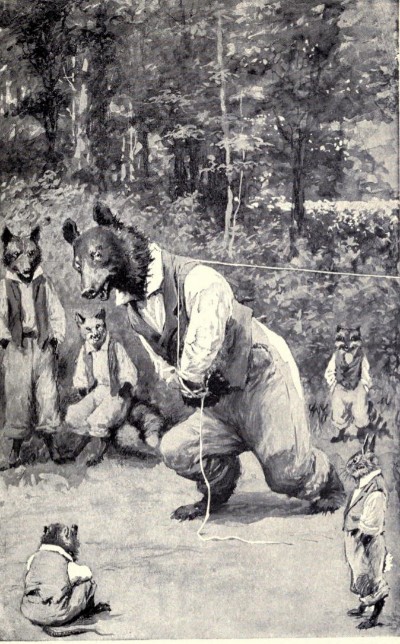 Then he turn round, he did, and put the rope cross his shoulders and try to walk off with Brer Terrapin, but Brer Terrapin look like he don't feel like walking.

Then Brer Wolf he put in and help Brer Bear pull, but just like he didn't, and then they all help him, and, bless gracious! Whiles they was all a pulling, Brer Terrapin, he holler, and ask 'em why they don't take up the slack. 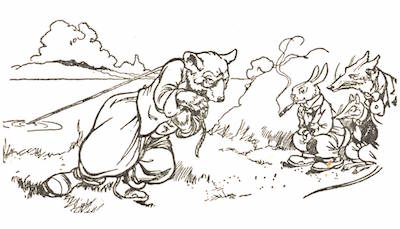 Then when Brer Terrapin feel 'em quit pulling, he dove down, he did, and untie the rope, and by the time they got to the branch, Brer Terrapin, he was sitting in the edge of the water just as natural as the next one, and he up and say, says he, "That last pull of your'n was a mighty stiff one, and a little more and you'd've had me," says he. "You are monstrous stout, Brer Bear," says he, "and you pulls like a yoke of steers, but I sort of had the purchase on you," says he.

Then Brer Bear, beings his mouth begun to water after the sweetening, he up and say he expect the candy's ripe, and off they put after it!

Next: The Story of the Deluge