Beowulf: The Words of Beowulf

The Words of Beowulf

And Unferth folded his hairy arms over his silver breastplate and glared at Beowulf in rage and hatred. For it must be remembered that this same Unferth, the son of Ecglaf, had never undertaken to fight for Hrothgar the king against the fiend Grendel, and he was wroth with all those who had done so in his stead. Many words of advice had he offered, to be sure, concerning this attack, but never once the strength of his black arms.

Now Beowulf rose in anger, also, and faced the dark brooding Unferth, but he had his anger and his tongue in better control than his adversary because he knew the words spoken against him to be false, and he replied softly, but in a clear voice, to the accusations against him.

"It is true," he began, "that I was called Sluggard when I was a boy, but I have killed my dragons with the best of my companions, and no one has ever called me coward. What have you done, O Black Unferth, against the arch-demon Grendel?"

Unferth made no answer and sulked shamefully in his seat, his face averted from the gleaming Beowulf who stood so tall above him.

"And as for Breca," Beowulf went on, "that man and I swam a great race, and all know that during it I battled against vast odds, and came out victor. We plunged into the sea, the Bronding and I, and we were in full battle array and carried swords in our hands to ward off the dangers of the deep. And for five days and nights we fought the sea-demons and the winds and the waves. Until finally I was cast ashore in some place far from home, and I was forced to make my way back on foot and alone. All Geatsland can swear to my valor, O son of Ecglaf, and no one until to-night has ever dared call me coward. I charge you, Unferth, to take back those foul words. It is not honorable that I should come to Daneland with my lords, in all friendliness offering to render service to your country and to your king, and be called a coward!"

From both Danes and Geats a murmur of approval went up for these noble words, and Hrothgar the king stood up in his place and spoke for the discomfited Unferth.

"All have heard," he said, "the temperate words of Beowulf, and they are the words of a hero. Beowulf will, I know, forgive us if one among us has spoken unwisely, for in our hearts, there has been sorrow these twelve long years, and sorrow long continued oft wears down the spirit and makes the tongue bitter with reproaches that we do not truly feel.

"Come now, my queen," he said to Wealhtheow, "pass the great cup among the lords of Geatsland, and give Beowulf first to drink. This is no time for foolish quarrels, and I enjoin you all to be of one mind and grateful to these young and noble men who have braved the wind and the waves to come to us in a time of need." 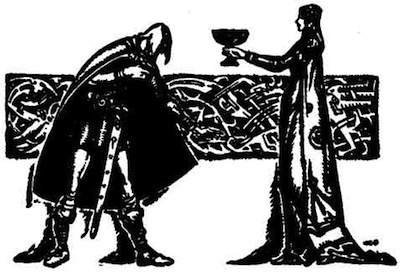 With these words, Hrothgar lifted to his lips the jeweled cup that Wealhtheow brought him, and then his lady took it again from his hands, and went down from the king's high table, and came near to Beowulf.

He took the cup from her and drank deep from its golden depths, and then Wealhtheow went from one to another of the Geatish earls, and each drank in his turn to the glory of Hrothgar and his queen, and to the destruction of Grendel. 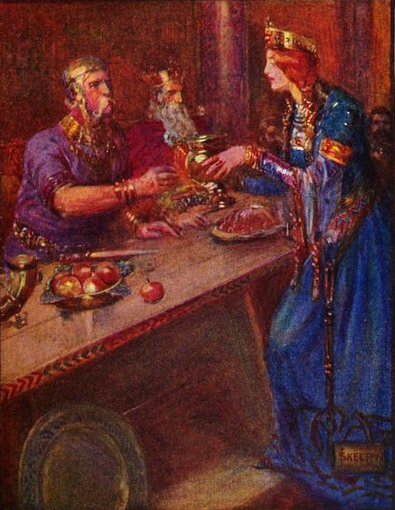 After this exchange, the banqueting was resumed with a good will, and many were the speeches made by the Danes praising the land of the Geats, and the earls of Hygelac were loud in their praise of the noble and venerable Hrothgar and his lady, Wealhtheow the Beautiful.

Then the king rose and gave the signal for their withdrawal. Taking his queen by the hand, to lead her from the hall, he turned to his retainers and said: "It is time, now, that we hasten to our bowers. Come, my friends, let us away from here that Beowulf and his earls may rest after their travel. And the gods grant that Grendel come not this night to trouble their sleep."

Then summoning Aescher and Unferth to his side, and with his hand upon his queen's wrist, Hrothgar departed from Heorot and left Beowulf and his companions to whatever fate might await them in the darkness of the deep night. 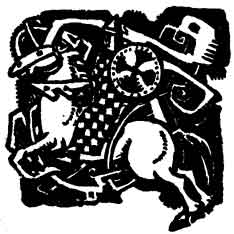 THE fires were burnt out on the hearths when the last of Hrothgar's train had departed. Then Beowulf and his companions set themselves to fastening tightly the door of the hall. They secured it with wooden bolts and tied it with leathern thongs, and so strong was it that no mortal could have passed through.

Then the warriors of Geatsland unfolded their cloaks upon the benches and laid themselves down to slumber, and Beowulf stretched his great length upon the dais of the king and resolved that through the long night he would never once close his eyes. Near the door lay the young Hondscio, Beowulf's favorite earl, who swore that if any one broke through the door of Heorot, he would be the first to give the intruder battle.

Silence crept over the shrouded forms where they lay upon the floor and benches, and there was no sound save their steady breathing and the faint sighing of the night-wind in the trees about the hall.