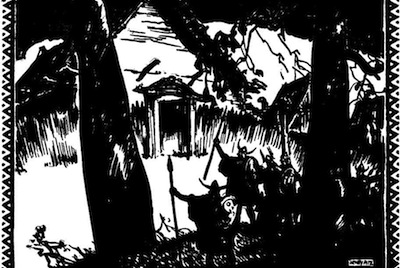 ON AND ON, through the vast, dense forests of Daneland, Beowulf and his companions toiled until the sweat stood out in drops upon their faces and their strong legs ached with the weariness of tramping. Their way led through dense underbrush and deep thicket, and Beowulf thought that it must have been many a long day since this passage to the sea had been used.

Finally the path straightened out, and they entered a long vale which suddenly broadened into a marshy meadow, dank and evil-smelling from the vapor which curled from its soggy earth. At the end of this swampy place stood the vast hall of Heorot, the greatest mead-hall in all the wide Northland. About it were clustered the abodes of Hrothgar and his retainers, and scattered here and there, desolate and forsaken, were the farms and dairies of the ill-fated king.

Over all this sad scene there was the odor of death and decay. The fields were untilled, the houses falling down for want of repair, and no human being was to be seen anywhere. Beowulf and his men entered a lane, and the clanking of their armor and their swords was the only sound to be heard as they picked their way along the weed-grown path toward Heorot.

They came to the hall gates, which stood ajar and swinging loosely on their hinges. For twelve long years the plague of Grendel had haunted the vast hall till it became a place of death instead of feasts and rejoicing.

Thrice Beowulf knocked upon the gates until the king's Herald appeared and asked in a frightened voice whence they came and what they wanted. Beowulf ordered the man to inform his master the king that warriors from Geatsland were come to visit him and craved food and a place to sleep. The man hurried away, with many a backward glance of fear at the proud array of these fifteen noble visitors in their shining armor.

While they waited for the king, the men from Geatsland looked curiously about them and peered into the dismal hall which in other days had been so famed throughout the countries of the North. Its once shining goldbright pillars were now cobwebbed with the years. The benches were mossgrown. No fine hangings were upon the walls. And on the hearths no fires were blazing.

Then presently there was the sound of footsteps, the clanking of armor, and Beowulf and his earls stood ready to greet Hrothgar the king.

First came a company of elderly warriors (for Grendel had killed and eaten all the young heroes of the court). Then the king himself appeared, wrapped in a rich mantle. He was an old man, with flowing white beard, strong hands, and eyes that told their own story of sleepless nights and harassed days. As the party approached Beowulf, the king, with hands outstretched, advanced with firm steps toward the Geatish lords.

"I bid you welcome, O Strangers," was his greeting, "for I can see at once that you come upon a friendly errand into this unhappy kingdom. Tell me, I pray, whence you have journeyed, for my trusty Herald tells me that you ordered him to me and would say nothing of yourself or of your business. Speak, my friends, for it is not proper that I should remain in ignorance of your identity." 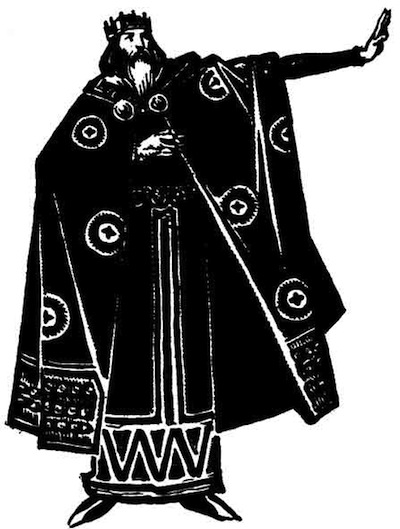 Then Beowulf answered in a loud voice, "I am Beowulf, Prince of Weders, son of Ecgtheow and nephew to that good man Hygelac, King of Geatsland. These, my fellows, have joined me in coming to the land of the Danes that we may deliver you from this arch-fiend Grendel of whom we have heard dread things."

"Beowulf, son of Ecgtheow!" cried Hrothgar. "'Why! This is in truth the son of my old war-brother, my friend! For Ecgtheow and I were comrades in arms many years ago, before sorrow came to Daneland. I knew you, Beowulf, when as a child you played about your father's hearth, pulling the ears of his dogs so that they cried out in pain and astonishment that one so young could have such strength in him. Welcome, son of my old friend! You are very welcome in Daneland, and from this day Heorot shall be yours. But I warn you, it is to Heorot that Grendel comes so frequently, greedy for youths to devour, and it is in Heorot that you will meet the demon. But come, let your earls lay down their weapons, and remove their armor, and seek rest. There will be feasting to-night in Heorot, and Wealhtheow, my queen, will pass the drinking-horn among you in token of our friendship for you and your brave companions."

Thus speaking, Hrothgar turned to his attendants and bade them prepare the hall for Beowulf and his warriors, and there was preparation everywhere for the feast that was to be held for these visitors from far-off Geatsland.

Next: The Words of Unferth