As Book V of Ovid's poem begins, the Muses are singing songs, and the first story you will hear is a song sung by Calliope, the muse of epic poetry. She sings of how Cupid struck Dis (Hades), the god of the underworld; the arrow will make the god fall in love, and the object of his affection will be Proserpine (Persophone), the daughter of the goddess Ceres.

Calliope, who rose, with her loose hair bound with ivy, tried out the plaintive strings with her fingers, then accompanied the wandering notes with this song:

Ceres first turned the soil with curving plough, first ripened the crops and produce of the earth, first gave us laws: all things are Ceres’s gift. My song is of her. If only I could create a song in any way worthy of the goddess! This goddess is truly a worthy subject for my song.

Trinacris, the vast isle of Sicily, had been heaped over the giant’s limbs, and with its great mass oppressed buried Typhoeus, he who had dared to aspire to a place in heaven. He struggles, it’s true, and often tries to rise, but his right hand is held by the promontory of Ausonian Pelorus, and his left hand by you, Pachynus. Lilybaeum presses on his legs, Etna weighs down his head, supine beneath it, Typhoeus throws ash from his mouth, and spits out flame. Often, a wrestler, he throws back the weight of earth, and tries to roll the high mountains and the cities from his body, and then the ground trembles, and even the lord of the silent kingdom is afraid lest he be exposed, and the soil split open in wide fissures, and the light admitted to scare the anxious dead.

Fearing this disaster, the king of the dark had left his shadowy realm, and, drawn in his chariot by black horses, carefully circled the foundations of the Sicilian land. When he had checked and was satisfied that nothing was collapsing, he relinquished his fears. 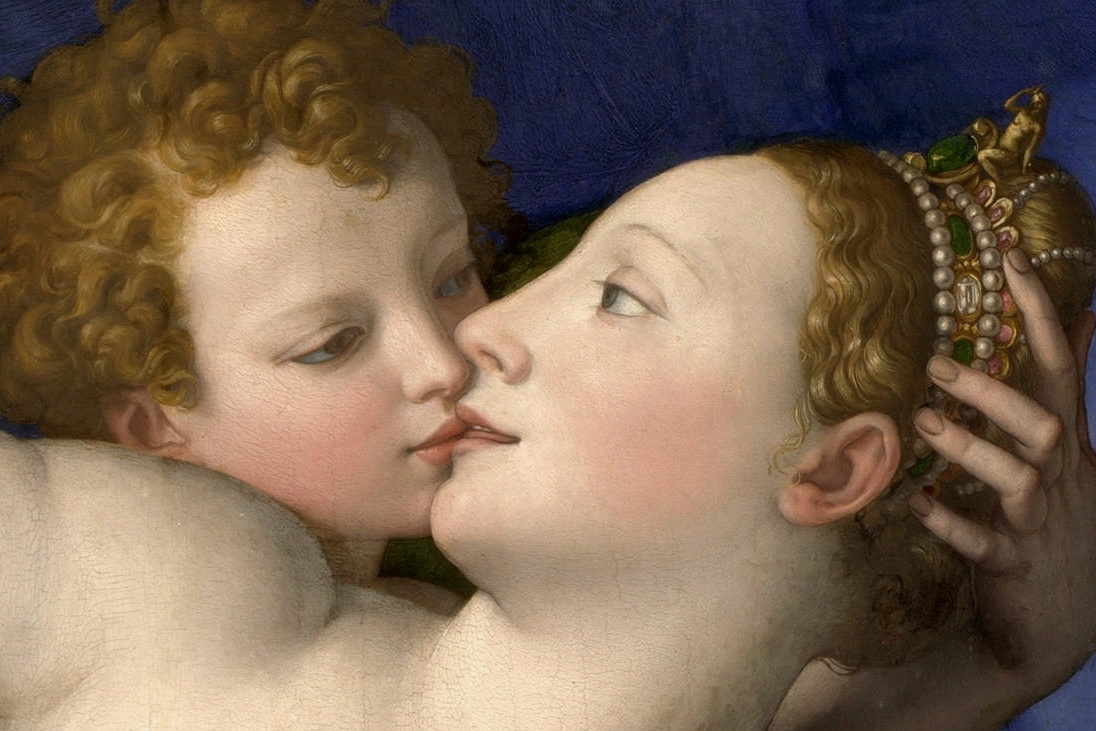 (Venus and Cupid, by Bronzino)

Then Venus, at Eryx, saw him moving, as she sat on the hillside, and embraced her winged son, Cupid, and said ‘My child, my hands and weapons, my power, seize those arrows, that overcome all, and devise a path for your swift arrows, to the heart of that god to whom the final share of the triple kingdom fell. You conquer the gods and Jupiter himself, the lords of the sea, and their very king, who controls the lords of the sea. Why is Tartarus excepted? Why not extend your mother’s kingdom and your own? We are talking of a third part of the world. And yet, as is evident to me, I am scorned in heaven, and Love’s power diminishes with mine. Don’t you see how Pallas, and the huntress Diana, forsake me? And Ceres’s daughter too, Proserpine, will be a virgin if we allow it, since she hopes to be like them. But you, if you delight in our shared kingdom, can mate the goddess to her uncle.’

So Venus spoke: he undid his quiver, and at his mother’s bidding took an arrow, one from a thousand, and none was sharper, more certain, or better obeyed the bow. Then he bent the pliant tips against his knee, and with his barbed arrow struck Dis in the heart.


Next: Dis and Proserpine