The feast day of Saint Mary of Egypt is celebrated on April 3, and you can read more about this saint at Wikipedia: Saint Mary of Egypt. She is best known as a saint in the Eastern Orthodox church, but she is also commemorated in the Roman Catholic calendar. Some sources date her life to the early fifth century, while other sources date her to the early sixth century.

As you will see, her story is very much connected with the story of a holy man named Zosimus. He is amazed to discover her in the desert, and even more so when he sees her levitating off the ground; at first he suspects she might be an evil spirit. He is soon persuaded of her holiness, however, when Mary tells him her life story and he learns that she has lived on just three loaves of bread grown hard as stone during her seventeen years of penance in the desert, during which time she was nourished instead by the word of God.

You will see that Mary asks that Zosimus come to her with the Eucharist on "Shere Thursday," which we is more commonly called Maundy Thursday in English, the Thursday before Easter.

[Notes by LKG]
This story is part of the Women Saints unit. Story source: The Golden Legend edited by F. S. Ellis (1900). 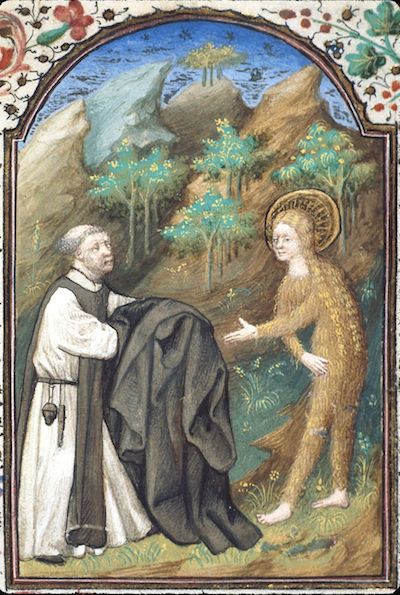 (Saint Mary in a 15th-century manuscript)

Here beginneth the life of Mary of Egypt

Mary the Egyptian, which was called a sinner, led and lived the most straight life and sharp that might be, forty-seven years in desert.

In that time was a good, holy and religious monk named Zosimus, and went through the desert which lieth beyond the flom Jordan and much desired to find some holy fathers. And, when he came far and deep in the desert, he found a creature which was all black over all her body, of the great heat and burning of the sun, which went in that desert, and that was this Mary Egyptiaca aforesaid.

But as soon as she saw Zosimus come, she fled, and Zosimus after. And she tarried and said: Abbot Zosimus, wherefore followest thou me? Have pity and mercy on me, for I dare not turn my face toward thee, because I am a woman and also naked, but cast thy mantle upon me, by which I may then, without shame, look and speak with thee.

And when Zosimus heard himself named he was greatly amarvelled, and anon he cast to her his mantle, and humbly prayed her that she would give to him her blessing; and she answered: It appertaineth to thee fair father to give the benediction, and nothing to me, for thou hast the dignity of priesthood.

When he heard that she knew his name and his office, he had yet more marvel, and of that she asked so meekly his blessing.

After, she said: Blessed be God the Saviour of our souls. Then she lift up her hands unto heaven in making her prayer, and Zosimus saw that in praying to God her body was lift up from the earth well nigh a foot and a half, and began to think that it had been some evil spirit.

Then Zosimus conjured her by the virtue of God that she should tell to him her estate and her condition, and she answered: Fair father, spare me thereof, for if I should recount mine estate ye should flee away from me like as from a venomous serpent, and thy holy ears should be made foul of my words, and the air should be full and foul of corruption.

And when she saw that Zosimus would not be satisfied so, then she said: Fair father I was born in Egypt, and when I was in the age of twelve years I went into Alexandria, and there I gave my body openly to sin by the space of seventeen years, and abandoned it to lechery and refused no man.

After, it happed that men of that country went for to adore and worship the holy cross in Jerusalem, and I prayed to one of the mariners that he would suffer me to pass with the other people the sea, and when he me demanded payment for my passage, I answered: Fair sirs, I have nothing to pay you with, but I abandon my body to do withal your pleasure for my passage, and they took me by that condition; and when I was come into Jerusalem unto the entry of the church for to worship the holy cross with the others, I was suddenly and invisibly put aback many times, in such wise that I might not enter into the church.

And then I returned and thought in myself that this came to me for the great sins that I had committed in time past, and began to smite my breast and weep tenderly and sigh grievously.

And I beheld there the image of our Lady, and I fell down and prayed her all weeping that she would impetre and get me pardon of my sins of her sweet Son, and would suffer me to enter into the church for to worship the holy cross, promising to forsake the world, and and from then forthon to live chaste.

When I had thus prayed, and to our blessed Lady thus faithfully promised, I went again to the doors of the church, and without any impediment I entered into the church. And when I had devoutly worshipped and adored the holy cross, a man gave to me three pence, of which I bought three loaves of bread.

And after, I heard anon a voice: If thou wilt pass and go over flom Jordan thou shalt be safe, and then I passed Jordan, and came into this desert, where I never saw man by the space of seventeen years.

These three loaves, that I bare with me, became hard, by the drought of the time, as a stone, of which I took my sustenance, and sufficed to me seventeen years, and after, I ate herbs. My clothes be rotten long sith, and these seventeen first years I was much tempted by the burning of the sun much asprely, and many delectations that I have had in meat and drink, the good wines, and doing the desires of my body, all these came in my thought. Then I bewailed them on the earth, and prayed for help to our blessed Lady in whom I had set all my affiance, and I wept much tenderly.

And anon I saw coming about me a great light, by the which I was all recomforted, and lost all the thoughts which oft and grievously tempted me. And sith, I have been delivered of all temptations and am nourished of spiritual meat of the word of our Lord. And thus have I been all my life as I have told to thee, and I pray thee by the incarnation of Jesu Christ that thou pray for me, sinful creature.

Then the old father Zosimus fell down unto ground, and thanked our Lord God that had thus saved his servant.

And she said: I pray thee fair father that thou wilt come again on the next Shere-Thursday, and bring with thee the body of our Lord for to housel me, for sith I entered into this desert I was never houseled ne received the holy sacrament, and then I shall come to flom Jordan against thee.

Zosimus went to his abbey, and, after the year passed, on Shere-Thursday he came again in to the place like as the holy woman had prayed him. And when he was come to flom Jordan he saw on that other side the holy woman, which made the sign of the cross upon the water and went on it, and came over to him.

When Zosimus saw this miracle, anon he fell down to the feet of the holy woman for to do to her honour and reverence, but she forbade and defended him and said: Thus oughtest thou not to do, for thou art a priest, and bearest the holy sacrament.

The which she received in right great devotion, and said in weeping: Lord God please it to thee to receive me in peace for mine eyes have seen my Saviour. How well that she had always wept and shed tears so abundantly that it seemed that she had lost her sight.

And after, she said to Zosimus: I pray thee that at the end of this year thou wilt come hither again to me and pray for me, sinful creature, and anon after, she made the sign of the cross upon the river and passed over the water with dry feet as she tofore came.

And Zosimus went again to his abbey, but he repented much that he had not demanded the name of the woman. And after the year passed he came again to the desert, like as he had promised to this holy woman, and he found her dead, and the body ordinately laid as it should be buried.

Zosimus began then anon tenderly to weep, and durst not approach ne touch the body, but said to himself: I would gladly bury this holy body if I knew that I should not displease her.

And when he was in this thought he saw Iying by her head a letter, that said in this manner: Zosimus, bury right here the body of the poor Mary and render to the earth his right, and pray to God for me, at whose commandment the second day after I received him, he called me from this world.

Then Zosimus was much glad that he knew the name of the saint, but he was greatly dismayed how he might bury the body, for he had nothing for to delve the earth with. And anon he saw the earth dolven, and a sepulchre made by a lion that came thither.

And then Zosimus buried her, and the lion departed debonairly, and Zosimus returned to his abbey and recounted to his brethren the conversation of this holy woman Mary.

And Zosimus lived an hundred years in holy life, and gave laud to God of all his gifts, and his goodness that he receiveth sinners to mercy, which with good heart turn to him, and promiseth to them the joy of heaven. 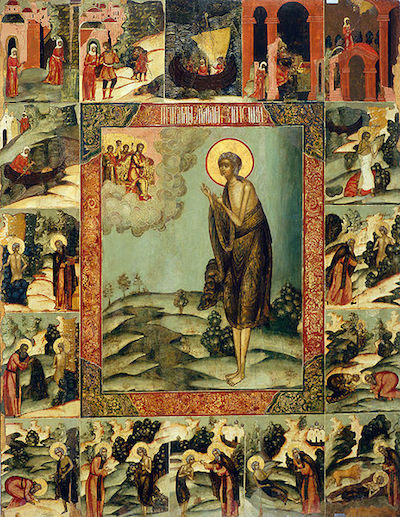