Phaethon insists on driving the chariot

‘No doubt, since you ask for a certain sign to give you confidence in being born of my blood, I give you that sure sign by fearing for you, and show myself a father by fatherly anxiety. Look at me. If only you could look into my heart, and see a father’s concern from within!

‘Finally, look around you, at the riches the world holds, and ask for anything from all of the good things in earth, sea, and sky. I can refuse you nothing. Only this one thing I take exception to, which would truly be a punishment and not an honour. Phaethon, you ask for punishment as your reward! Why do you unknowingly throw your coaxing arms around my neck? Have no doubt! Whatever you ask will be given, I have sworn it by the Stygian streams, but make a wiser choice!’

The warning ended, but Phaethon still rejected his words, and pressed his purpose, blazing with desire to drive the chariot. So, as he had the right, his father led the youth to the high chariot, Vulcan’s work. It had an axle of gold, and a gold chariot pole, wheels with golden rims, and circles of silver spokes. Along the yoke chrysolites and gemstones, set in order, glowed with brilliance reflecting Phoebus’s own light.

Now while brave Phaethon is gazing in wonder at the workmanship, see, Aurora, awake in the glowing east, opens wide her bright doors, and her rose-filled courts. The stars, whose ranks are shepherded by Lucifer the morning star, vanish, and he, last of all, leaves his station in the sky.

When Titan saw his setting, as the earth and skies were reddening, and just as the crescent of the vanishing moon faded, he ordered the swift Hours to yoke his horses. The goddesses quickly obeyed his command, and led the team, sated with ambrosial food and breathing fire, out of the tall stables, and put on their ringing harness.

Then the father rubbed his son’s face with a sacred ointment and made it proof against consuming flames, and placed his rays amongst his hair, and foreseeing tragedy, and fetching up sighs from his troubled heart, said, ‘If you can at least obey your father’s promptings, spare the whip, boy, and rein them in more strongly! They run swiftly of their own accord. It is a hard task to check their eagerness. And do not please yourself, taking a path straight through the five zones of heaven! The track runs obliquely in a wide curve, and bounded by the three central regions, avoids the southern pole and the Arctic north. This is your road, you will clearly see my wheel-marks, and so that heaven and earth receive equal warmth, do not sink down too far or heave the chariot into the upper air! Too high and you will scorch the roof of heaven: too low, the earth. The middle way is safest.

‘Nor must you swerve too far right towards writhing Serpens, nor lead your wheels too far left towards sunken Ara. Hold your way between them! I leave the rest to Fortune; I pray she helps you, and takes better care of you than you do yourself. While I have been speaking, dewy night has touched her limit on Hesperus’s far western shore. We have no time for freedom! We are needed: Aurora, the dawn, shines, and the shadows are gone. Seize the reins in your hand, or if your mind can be changed, take my counsel, do not take my horses! While you can, while you still stand on solid ground, before unknowingly you take to the chariot you have unluckily chosen, let me light the world, while you watch in safety!’

The boy has already taken possession of the fleet chariot, and stands proudly, and joyfully, takes the light reins in his hands, and thanks his unwilling father.

Meanwhile the sun’s swift horses, Pyroïs, Eoüs, Aethon, and the fourth, Phlegon, fill the air with fiery whinnying, and strike the bars with their hooves. When Tethys, ignorant of her grandson’s fate, pushed back the gate, and gave them access to the wide heavens, rushing out, they tore through the mists in the way with their hooves and, lifted by their wings, overtook the East winds rising from the same region. But the weight was lighter than the horses of the Sun could feel, and the yoke was free of its accustomed load. Just as curved-sided boats rock in the waves without their proper ballast, and being too light are unstable at sea, so the chariot, free of its usual burden, leaps in the air and rushes into the heights as though it were empty.

As soon as they feel this the team of four run wild and leave the beaten track, no longer running in their pre-ordained course. He was terrified, unable to handle the reins entrusted to him, not knowing where the track was, nor, if he had known, how to control the team. Then for the first time the chill stars of the Great and Little Bears, grew hot, and tried in vain to douse themselves in forbidden waters. And the Dragon, Draco, that is nearest to the frozen pole, never formidable before and sluggish with the cold, now glowed with heat, and took to seething with new fury. They say that you, Bootës, also fled in confusion, slow as you are and hampered by the Plough.


Phaethon lets go of the reins

When the unlucky Phaethon looked down from the heights of the sky at the earth far, far below he grew pale and his knees quaked with sudden fear, and his eyes were robbed of shadow by the excess light. Now he would rather he had never touched his father’s horses, and regrets knowing his true parentage and possessing what he asked for. Now he wants only to be called Merops’s son, as he is driven along like a ship in a northern gale, whose master lets go the ropes, and leaves her to prayer and the gods.

What can he do? Much of the sky is now behind his back, but more is before his eyes. Measuring both in his mind, he looks ahead to the west he is not fated to reach and at times back to the east. Dazed, he is ignorant how to act, and can neither grasp the reins nor has the power to loose them, nor can he change course by calling the horses by name.

Also, alarmed, he sees the marvellous forms of huge creatures everywhere in the glowing sky. There is a place where Scorpio bends his pincers in twin arcs, and, with his tail and his curving arms stretched out to both sides, spreads his body and limbs over two star signs. When the boy saw this monster drenched with black and poisonous venom threatening to wound him with its arched sting, robbed of his wits by chilling horror, he dropped the reins.

When the horses feel the reins lying across their backs, after he has thrown them down, they veer off course and run unchecked through unknown regions of the air. Wherever their momentum takes them there they run, lawlessly, striking against the fixed stars in deep space and hurrying the chariot along remote tracks. Now they climb to the heights of heaven, now rush headlong down its precipitous slope, sweeping a course nearer to the earth.

The Moon, amazed, sees her brother’s horses running below her own, and the boiling clouds smoke. The earth bursts into flame, in the highest regions first, opens in deep fissures and all its moisture dries up. The meadows turn white, the trees are consumed with all their leaves, and the scorched corn makes its own destruction. But I am bemoaning the lesser things. Great cities are destroyed with all their walls, and the flames reduce whole nations with all their peoples to ashes.

Nevertheless, kindly Earth, surrounded as she was by sea, between the open waters and the dwindling streams that had buried themselves in their mother’s dark womb, lifted her smothered face. Putting her hand to her brow, and shaking everything with her mighty tremors, she sank back a little lower than she used to be, and spoke in a faint voice, ‘If this pleases you, if I have deserved it, O king of the gods, why delay your lightning bolts? If it is right for me to die through the power of fire, let me die by your fire and let the doer of it lessen the pain of the deed! I can hardly open my lips to say these words’ (the heat was choking her). ‘Look at my scorched hair and the ashes in my eyes, the ashes over my face! Is this the honour and reward you give me for my fruitfulness and service, for carrying wounds from the curved plough and the hoe, for being worked throughout the year, providing herbage and tender grazing for the flocks, produce for the human race and incense to minister to you gods?

‘Even if you find me deserving of ruin, what have the waves done, why does your brother deserve this? Why are the waters that were his share by lot diminished and so much further from the sky? If neither regard for me or for your brother moves you pity at least your own heavens! Look around you on either side: both the poles are steaming! If the fire should melt them, your own palace will fall! Atlas himself is suffering, and can barely hold up the white-hot sky on his shoulders! If the sea and the land and the kingdom of the heavens are destroyed, we are lost in ancient chaos!  Save whatever is left from the flames, and think of our common interest!’


Next: The Death of Phaethon 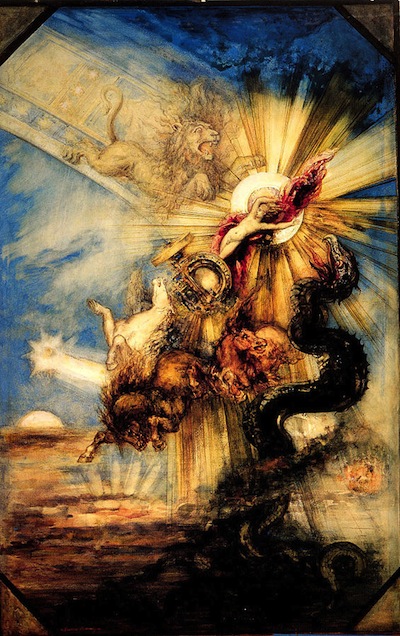