This story is part of the Noah unit. Story source: The Legends of the Jews by Louis Ginzberg (1909); for audio, see previous page.

The assembling of the animals in the ark was but the smaller part of the task imposed upon Noah. His chief difficulty was to provide food for a year and accommodations for them.

Long afterward, Shem, the son of Noah, related to Eliezer, the servant of Abraham, the tale of their experiences with the animals in the ark. This is what he said: "We had sore troubles in the ark. The day animals had to be fed by day, and the night animals by night. My father knew not what food to give to the little zikta. Once he cut a pomegranate in half, and a worm dropped out of the fruit, and was devoured by the zikta. Thenceforth my father would knead bran, and let it stand until it bred worms, which were fed to the animal. The lion suffered with a fever all the time, and therefore he did not annoy the others, because he did not relish dry food. The animal urshana my father found sleeping in a corner of the vessel, and he asked him whether he needed nothing to eat. He answered, and said: 'I saw thou wast very busy, and I did not wish to add to thy cares.' Whereupon my father said, 'May it be the will of the Lord to keep thee alive forever,' and the blessing was realized."

The difficulties were increased when the flood began to toss the ark from side to side. All inside of it were shaken up like lentils in a pot. The lions began to roar, the oxen lowed, the wolves howled, and all the animals gave vent to their agony, each through the sounds it had the power to utter.

Also Noah and his sons, thinking that death was nigh, broke into tears. Noah prayed to God: "O Lord, help us, for we are not able to bear the evil that encompasses us. The billows surge about us, the streams of destruction make us afraid, and death stares us in the face. O hear our prayer, deliver us, incline Thyself unto us, and be gracious unto us! Redeem us and save us!"

There were other changes among the celestial spheres during the year of the flood. All the time it lasted, the sun and the moon shed no light, whence Noah was called by his name, "the resting one," for in his life the sun and the moon rested. The ark was illuminated by a precious stone, the light of which was more brilliant by night than by day, so enabling Noah to distinguish between day and night.

The duration of the flood was a whole year. It began on the seventeenth day of Heshwan, and the rain continued for forty days, until the twenty-seventh of Kislew. The punishment corresponded to the crime of the sinful generation. They had led immoral lives, and begotten bastard children, whose embryonic state lasts forty days. From the twenty seventh of Kislew until the first of Siwan, a period of one hundred and fifty days, the water stood at one and the same height, fifteen ells above the earth. During that time all the wicked were destroyed, each one receiving the punishment due to him. Cain was among those that perished, and thus the death of Abel was avenged. So powerful were the waters in working havoc that the corpse of Adam was not spared in its grave.

On the first of Siwan the waters began to abate, a quarter of an ell a day, and at the end of sixty days, on the tenth day of Ab, the summits of the mountains showed themselves. But many days before, on the tenth of Tammuz, Noah had sent forth the raven, and a week later the dove, on the first of her three sallies, repeated at intervals of a week. It took from the first of Ab until the first of Tishri for the waters to subside wholly from the face of the earth. Even then the soil was so miry that the dwellers in the ark had to remain within until the twenty-seventh day of Heshwan, completing a full sun year, consisting of twelve moons and eleven days.

Noah had experienced difficulty all along in ascertaining the state of the waters. When he desired to dispatch the raven, the bird said: "The Lord, thy Master, hates me, and thou dost hate me, too. Thy Master hates me, for He bade thee take seven pairs of the clean animals into the ark, and but two pairs of the unclean animals, to which I belong. Thou hatest me, for thou dost not choose, as a messenger, a bird of one of the kinds of which there are seven pairs in the ark, but thou sendest me, and of my kind there is but one pair. Suppose, now, I should perish by reason of heat or cold, would not the world be the poorer by a whole species of animals? Or can it be that thou hast cast a lustful eye upon my mate, and desirest to rid thyself of me?"

Where unto Noah made answer, and said: "Wretch! I must live apart from my own wife in the ark. How much less would such thoughts occur to my mind as thou imputest to me!"

The raven's errand had no success, for when he saw the body of a dead man, he set to work to devour it, and did not execute the orders given to him by Noah.

Thereupon the dove was sent out. Toward evening she returned with an olive leaf in her bill, plucked upon the Mount of Olives at Jerusalem, for the Holy Land had not been ravaged by the deluge. As she plucked it, she said to God: "O Lord of the world, let my food be as bitter as the olive, but do Thou give it to me from Thy hand, rather than it should be sweet, and I be delivered into the power of men."


Next: Noah Leaves the Ark 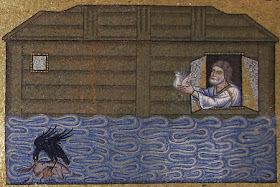